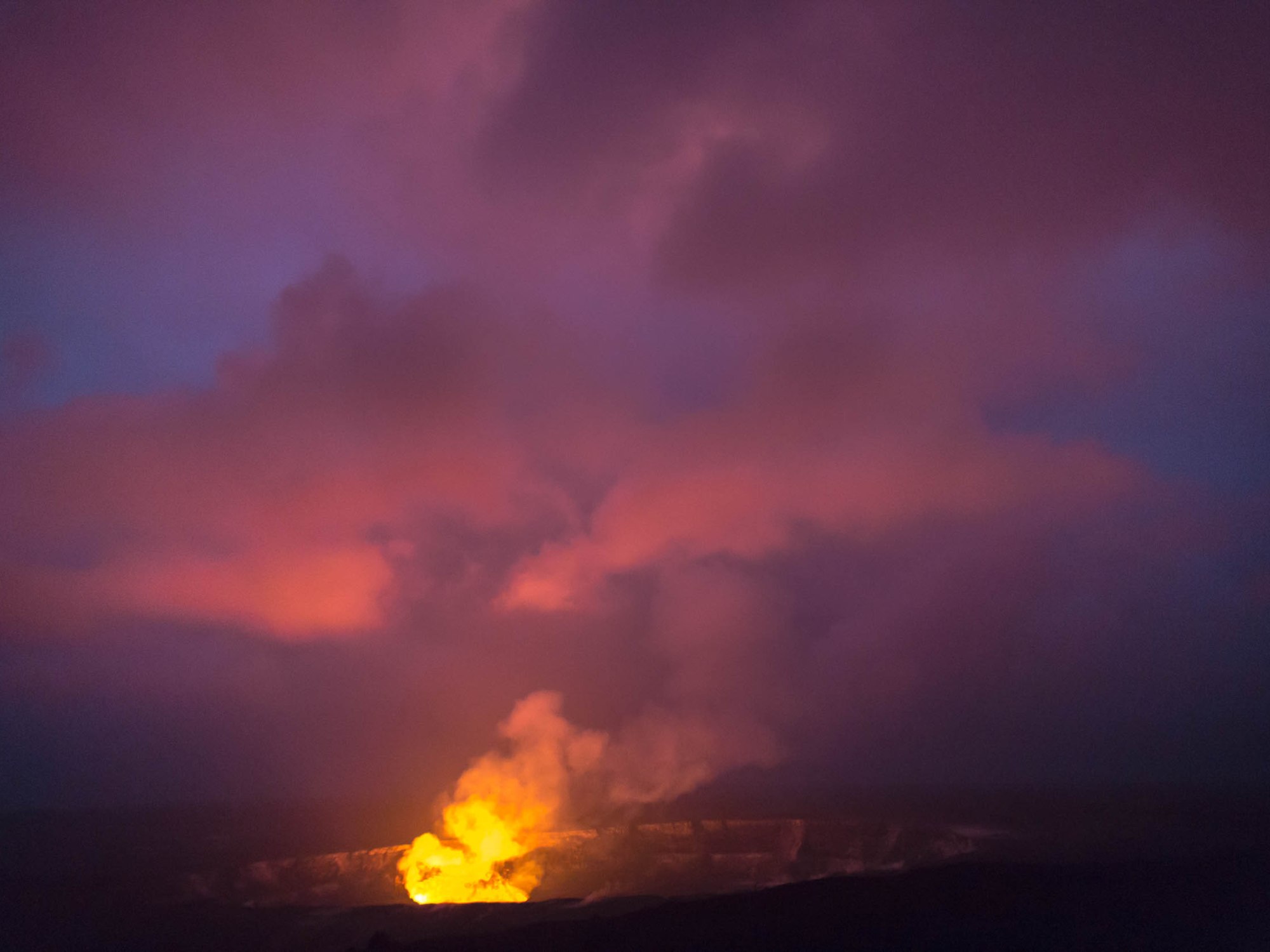 One thing we’ve learned about the Big Island of Hawai’i is that it’s simply one giant volcano sitting in the middle of the pacific ocean. The island isn’t done forming, and because of that, it’s moody and unpredictable like an angsty teenanger. Earthquakes, volcano flows, storms, droughts… it’s all happening on a daily basis here in paradise.

A trip to this island without coming to Volcanoes National Park is like going to Lollapalooza in 1992 and leaving before Pearl Jam. Of course it’s possible, but you’ll miss what is arguably the centerpiece in landscape and a driving force of the culture on the island. We stayed with our friends who are releasing a feature length documentary exploring the communities reaction to the recent lava flow and the clash of cultures surrounding it.

We started off the day by taking a short hike to a lava tube located near the park entrance. the tube is short, and wide, so it’s both exciting and comfortable. The trail leads down through lush forest until you come to the mouth of the cave. 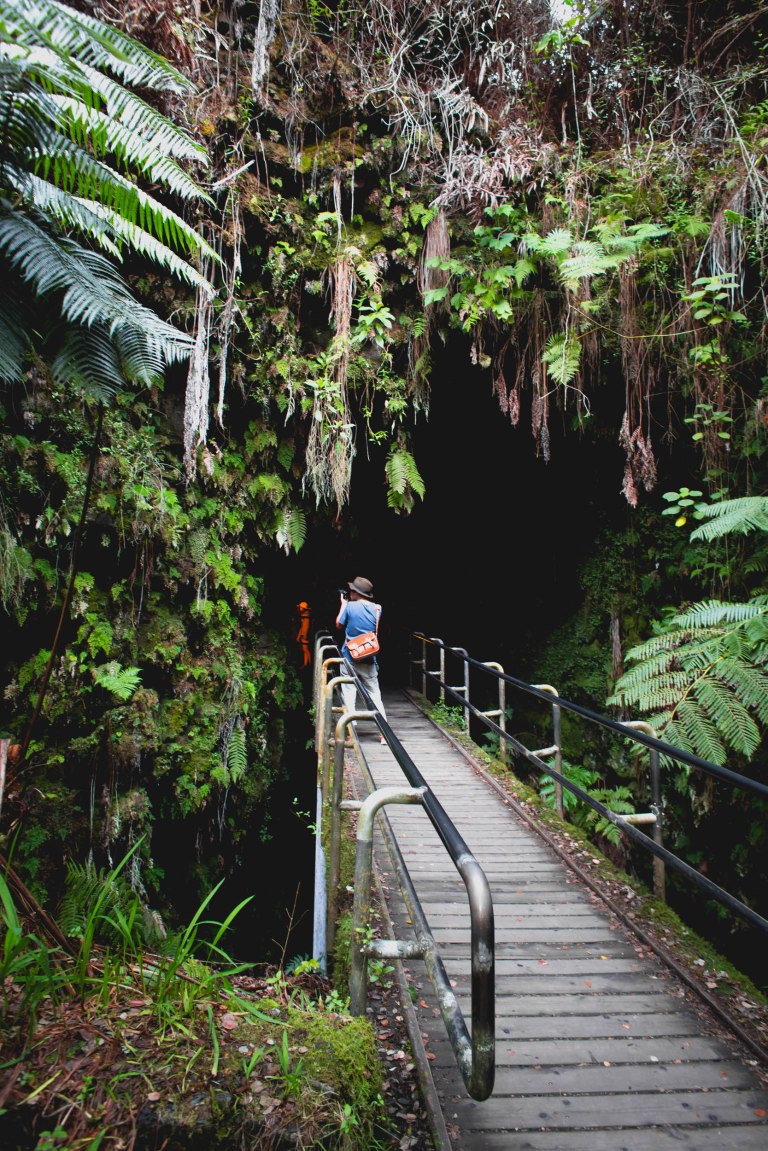 We had to pause at the mouth of the cave, the lush forest giving way to the dark cave was extraordinary. Plant life was thriving as far as the natural light reaching into the cave, showing what a little light, and a little tenacity can do for you. 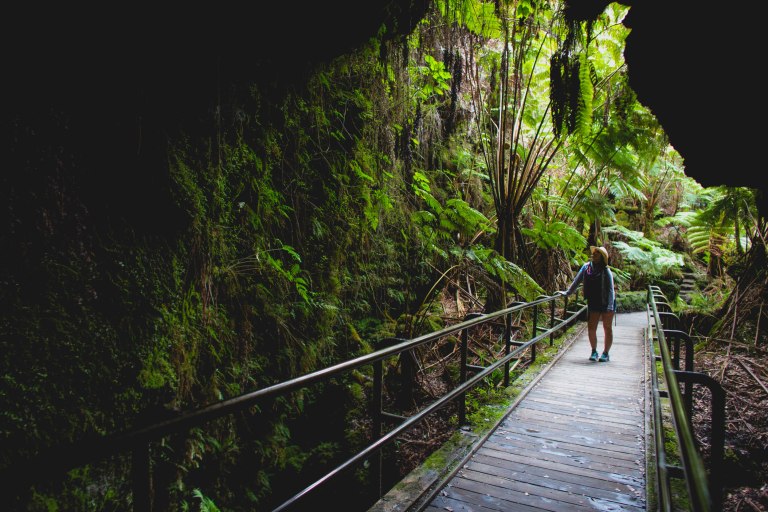 The cave was short, and only took about a half hour, so we moved on to the Kilauea Iki trail. This hike was a steep downhill hike to ground zero of a steaming crater that erupted about 50 years ago. This was an other worldly trip to a place that once was literally a lake of liquid lava and currently a forest of steam vents and jagged rocks with only the hint of plant life. 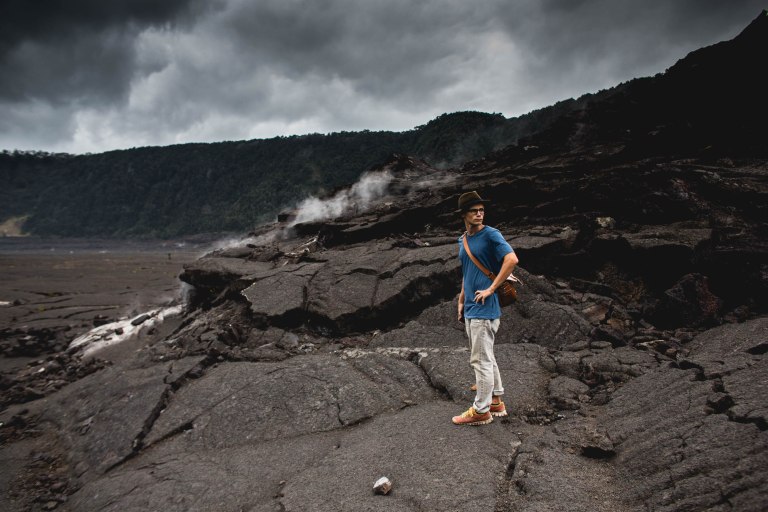 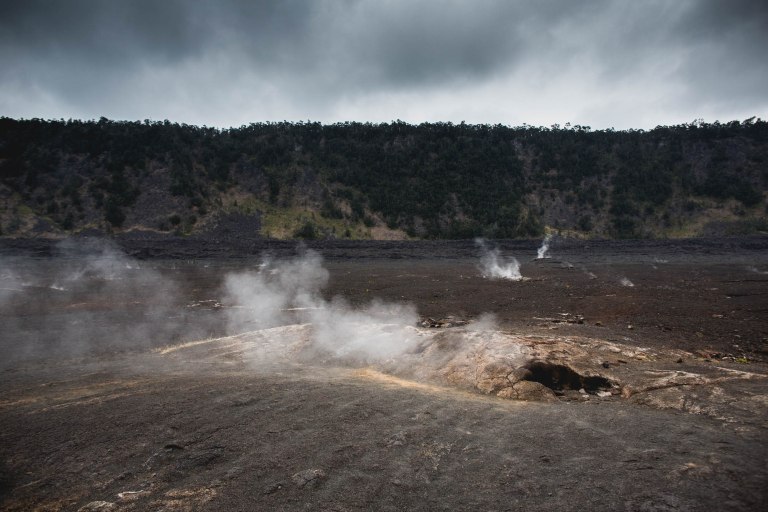 Once we made it through the crater, there was a brutal uphill hike that almost killed all four of us, but we made it. After a bit of a conversation, we left the park for dinner in the nearby town of Volcano at Thai Thai Restaurant (no, that’s not a typo).

Once we finished our yummy Thai food, we went back to the park to see the main attraction, the fury of the island: The Kilauea volcano crater.

Geoff had one thing on his “to-do” list for this adventure and it was to see lava. This was the place to see it, and boy did the trip back pay off. We got there just past sunset in what photographers call the “blue hour”, the hour after sunset where the light fades from light blue to black. This light, combined with the light from the caldera, made a fantastic moment. 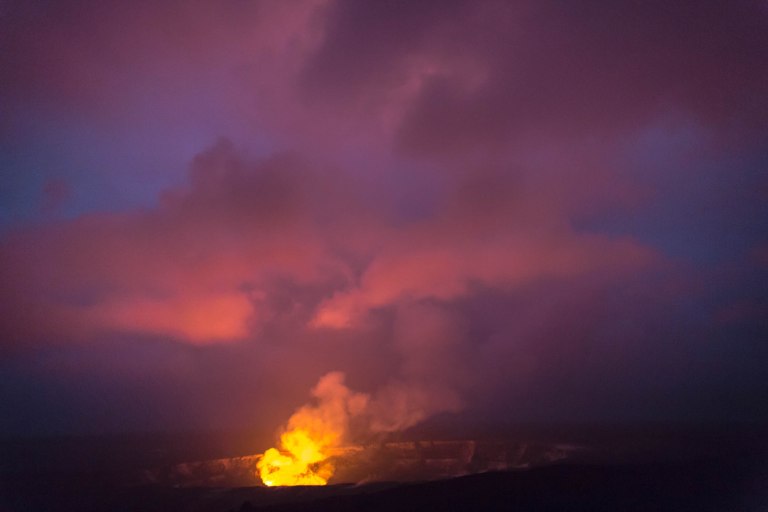 A little later, the volcano looked even more fiery and angry, as she lost all of her delicate edges. 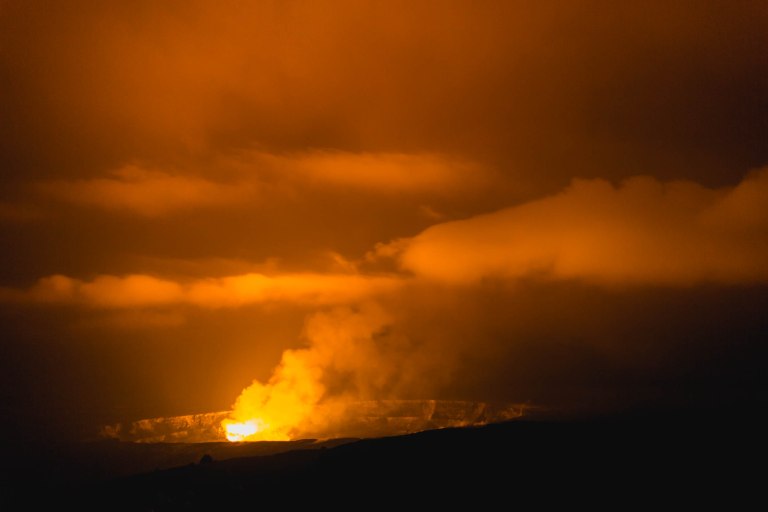 It’s an amazing experience being on a piece of land that isn’t completely formed yet. The earth is crafting a new piece of land, and it’s evolving every moment. The story of the landscape tells this tale, as you can be in lush, ancient forest one moment and in the middle of a lava desert from a recent flow in the next.

Seeing the heart of the island is much like seeing into our own hearts; we are growing and changing every moment too. Everything flows from the center, and it’s our mission to keep the best and remove the things that aren’t working. This part of the island has helped us understand a part of ourselves that we hadn’t connected to yet. And now, we will never be the same.

Dava and Geoff are Oregon-based adventure seekers. They spend as much time as possible out "in the wild" trying to find beauty in all shapes and sizes.

Both east coasters by family, Dava and Geoff have laid roots on the west coast for over 10 years. After spending a few years baking in the dry, desert heat of Los Angeles, they moved up to greener pastures; Portland, Oregon.

They've decided to share their adventures on www.52-places.com as a way to motivate and inspire people to get out into the world. Once a week, for every 52 weeks of the year, Dava and Geoff have committed to taking an adventure together- And anyone else who wants to join them!