We decided to get away for a few days over New Years and rent a cabin in the Mt. Hood forest town of Rhododendron. We found it on AirBnb (thanks Katherine!) and the cabin was perfectly non-murdery and cozy as can be! The first night the fire was roaring, the wind was blowing cold outside and the snow, which was about knee deep, was soft and beautiful in the moonlight. 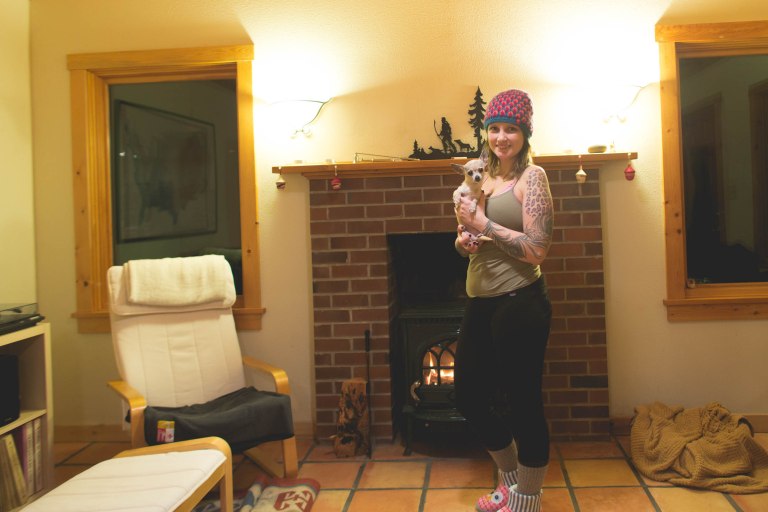 The next morning, Geoff was pushing to go to Ramona Falls. Dava didn’t know why at the time, but Geoff had a sparkly diamond in his pocket and had picked Ramona Falls as THE place to bend a knee and ask the question. We knew that there was a bridge that was removed during the winter but we read that you could still get across, so why not try, right?

On our way up, we were driving on roads that were perfectly clear, then a little icy, then very icy, and finally narrow icy, snowy roads that had 4 foot ditches on either side with about waist deep snow banks. The trailhead was only a mile further, so Geoff pushed to keep going.

Then the road got worse. Loose snow, no real road, just a pair of tire tracks in the deep snow. At the point where we both felt uncomfortable, we decided to turn back. Since we couldn’t turn around, the only way back was to reverse it down the mountain.

About 100 feet into our trip backing down the mountain, the car got stuck when we missed the tire tracks and went into the snowbank. We got out, dug the car out, and as we pushed the gas the front end of the car slipped into the ditch. Uh-oh.

There wasn’t much more we could do by ourselves, so we started down the hill on foot. About 1.5 miles down the road we met Justin and Troy who came up and tried to help (thanks guys!) but we couldn’t get it out- the more we tried, the further into the ditch the car went. 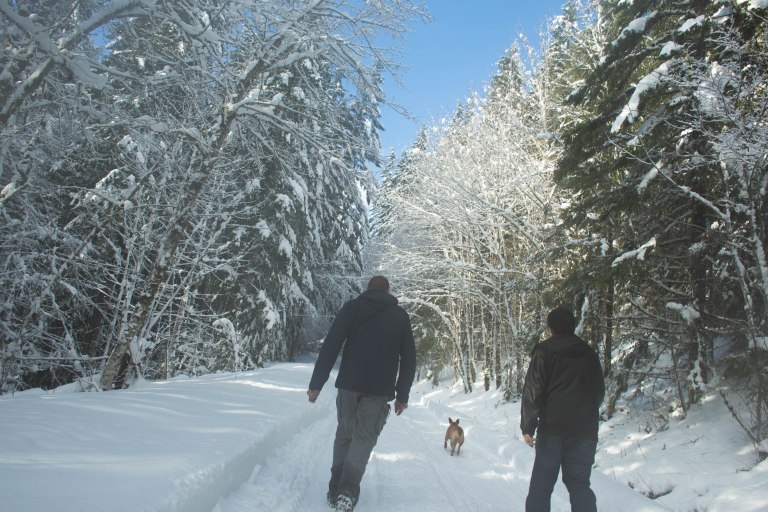 We jumped into the back of Justin’s pick-up and drove to town, about 5 mile in all. If you’ve never ridden in the back of a pick-up at 35 mph in sub freezing weather then you can’t understand cold. There are no words. Just, cold.

It took about 2.5 hours to get a tow truck to pick us up from where we were in town and we headed up. Tow-Truck Justin (not to be confused with Pick-Up Justin) was a nice guy who seemed to really love helping people. He bravely drove a flatbed truck up a road that we didn’t feel comfortable in our SUV, he got stuck (3 times!) and never lost his shit.

Anyway, it was about 45 minutes past sunset and the forest was dark. There is a quality to the dark forest where basically anything feels possible. As we sit here in this warm, well lit cabin writing this, it all seems silly, but when you’re out in the woods vampires, werewolves and evil are alive and well, lurking just outside of the spray of light. 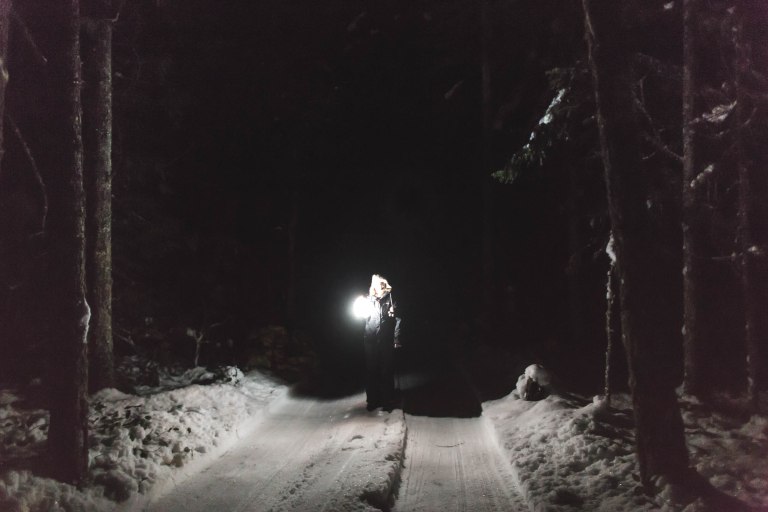 The truck’s lights danced left and right as we navigated the icy white road. We didn’t see another soul out there, and the night was quiet. We came around a bend, and the lights brought something out of the darkness- Something was in the road.

As we pulled closer, a fallen tree began to resolve in our vision lying directly across the road. Of all the luck! We pulled closer to the log which was about 1/4 mile away from where our car was and got out of the truck.

Justin went over and looked at the tree and looked back with a hint of fear in his eyes. It was apparent the tree had been intentionally cut down and left blocking the road. A quarter mile before our car. At night, in the forest, where anything seems possible.

After a lot of thought, we decided to leave and come back in the morning. We were unarmed, it was night, and we had no idea what we were walking into. A car thief with a gun? A gang of angry mountain people? The Governor from Walking Dead? It just wasn’t worth it to find out.

We’ll save you the details of our journey back down, but just know it involved reversing a flatbed truck down a narrow mountain road in the dark, getting stuck and finally making it to civilization.

After a long day of stress, tears (mostly from Dava), anger and defeat, we finally got the car off the mountain the next day. The car was intact, undamaged and even had the ice scraper we left in the snow placed on the windshield with an arrow drawn in the snow so we didn’t miss it. There are so many questions. Why did they cut the tree down? Who did it? What was the purpose? I guess we’ll never really know…

What we do know is that over the past few days, we’ve really seen the best of people. There were a number of times where we could have been in real trouble if it wasn’t for people helping us along the way. Sometimes it’s good to pull your head out of the news and really meet people. It’s a hard world, but it’s also a kind world full of compassionate people who can help you. It’s been a humbling experience and for that reason alone this was the exact adventure that we needed this weekend.

**So many thanks to Mt. Hood Roasters for their generous hospitality and kindness to us! We can’t thank you enough!**

3 thoughts on “The Adventure You Are Given”

Dava and Geoff are Oregon-based adventure seekers. They spend as much time as possible out "in the wild" trying to find beauty in all shapes and sizes.

Both east coasters by family, Dava and Geoff have laid roots on the west coast for over 10 years. After spending a few years baking in the dry, desert heat of Los Angeles, they moved up to greener pastures; Portland, Oregon.

They've decided to share their adventures on www.52-places.com as a way to motivate and inspire people to get out into the world. Once a week, for every 52 weeks of the year, Dava and Geoff have committed to taking an adventure together- And anyone else who wants to join them!